Ways To Ring In The Chinese New Year 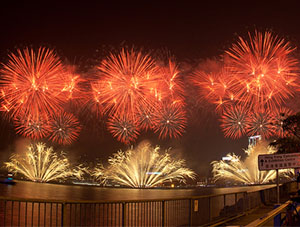 Part of celebrating the Chinese New Year (February 19) involves cleaning. Traditionally, homes are cleaned before the New Year, but sweeping and dusting isn’t done until the third day after New Year out of fear that good fortune will be swept away. The floors can be swept, starting by brushing the dust and dirt towards the middle of the house or building. Once the debris is piled into the center, it’s moved to the corners where it remains until the fifth day, at which point it can be thrown out.

Whether you intend on hosting an extravagant New Year’s Eve party with dozens of friends, or you plan on having a low-key evening with your family, you should decorate your home to reflect this ceremonial event. Some traditional decorative practices for the Chinese New Year include the use of red lanterns, couplets, door god designs, and images of the upcoming year’s Chinese astrology animal (hint: 2015 is Year of The Goat).

We can’t talk about ways to ring in the Chinese New Year without mentioning fireworks. This joyful practice is said to expunge the old year while welcoming the new one. Traditional belief is that all doors and windows should be left open on midnight New Year’s Eve so the old year can go out. Just remember to close them back once the celebration is over!

When you’re choosing an outfit to wear on New Year’s, look for something red. Red is symbolic of happiness and longevity, and wearing it is believed to bring a similar future to the individual. This is the reason why you see so many people dressed in red during the Chinese New Year celebrations.

Lastly, avoid using knives on New Year’s Day. You may find it difficult to prepare food, but traditional Chinese superstition states that using knives on February 19 “cuts” off a person’s good fortune (whether or not there’s any truth to these superstitions is debatable; but given the fact that people have followed these traditions for centuries, it’s probably a good idea to follow them!).

Ways To Ring In The Chinese New Year was last modified: February 11th, 2015 by admin

This article was posted in Acupuncture, Wellness and tagged Chinese, lunar, new year. Bookmark the permalink. Follow comments with the RSS feed for this post. Both comments and trackbacks are closed.
781-383-8877 Directions Contact/Schedule