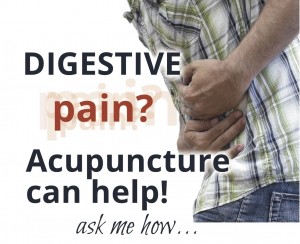 Do you suffer from irritable bowel syndrome (IBS)?

According to the International Foundation for Functional Gastrointestinal Disorders (IFFGD), an estimated 25-45 million people in the United States have IBS (source). This all-too-common disease is characterized by chronic stomach pain, bloating, diarrhea, constipation, excess gas, and irregular bowel movements. While there’s no known cure for IBS, however, acupuncture may offer relief.

“Acupuncture for irritable bowel syndrome provided an additional benefit over usual care alone. The magnitude of the effect was sustained over the longer term. Acupuncture should be considered as a treatment option to be offered in primary care alongside other evidenced based treatments,” wrote researchers in the study’s conclusion.

So, how is this Traditional Chinese Medicine (TCM) able to treat IBS? Traditional Chinese belief states that our bodies have an active energy force (Qi) which connects our organs and vital systems. Normally, Qi flows without obstruction, traveling along defined pathways known as the meridian system. When a blockage occurs within the body, blood becomes stagnant and systems are vulnerable to disease and illness, which is where acupuncture comes into play.

Acupuncture involves the placement of thin needles in specific areas of the body, rightfully known as acupuncture points. While the exact number of acupuncture points has fluctuated over the years, TCM practitioners give the ballpark figure of roughly 2,000, all of which are spread across 12 major meridians and 8 secondary meridians. The primary function of acupuncture is to restore Qi by correcting blockages in the meridians. When Qi begins to flow, diseases and health conditions such as IBS correct themselves.

Will acupuncture cure your IBS?

There’s not enough evidence to definitively say that it’s a cure for IBS. However, numerous studies, including the one cited above, attest to the healing power of acupuncture. Whether you experience minor or severe symptoms as a result of IBS, you should consider seeking acupuncture. It’s a safe, pain-free and highly effective way to treat a wide variety of diseases, one of which is Irritable Bowel Syndrome.

Foods To Avoid For People With IBS

Irritable bowel syndrome (IBS) is a digestive condition characterized by chronic stomach pain, bloating, irregular bowel movements, diarrhea and/or constipation. It’s estimated that upwards of 15% of the United States population suffers from IBS, many of whom do not even realize it. While there’s no known cure for IBS, individuals can prevent symptoms from occurring by avoiding the consumption of certain foods.

Although they are loaded in beneficial nutrients like vitamin K, vitamin C, vitamin B6, folate, manganese and fiber, Brussels sprouts should be avoided by people with IBS. This fun-sized vegetable can worsen the symptoms of IBS by promoting excess gas and abdominal pain. While each and every case of IBS is unique, most people report adverse symptoms after consuming Brussels sprouts.

Another food that you should avoid is broccoli. This crunchy, stalky vegetable is both high in fiber and promotes gas – two elements that can worsen IBS symptoms. It’s important to note, however, that cooking broccoli may eliminate some or all of its negative effects. So if raw, uncooked broccoli triggers a bout of IBS, try steaming or sautéing it. Doing so may allow you to reap the nutritional benefits of this vegetable without irritating your digestive system.

The truth is that any high-fiber vegetable may cause digestive issues in people with IBS, so don’t assume that broccoli and Brussels sprouts are the only culprits.

You may want to think twice before eating a milk-filled bowl of cereal for breakfast in the morning, as it can worsen IBS symptoms. Normally, the small intestine does a pretty good job at breaking down lactose. If there are not enough enzymes to perform this operation, however, some of it will travel to the large intestine where it’s fermented. Not only will this cause gas, but it can also cause bloating, cramps, spasms and diarrhea.

It should come as no surprise that beans is on our list of foods for IBS sufferers to avoid. Beans (legumes) contain a special type of sugar known as oligosaccharide, which the body is unable to break down. Since they aren’t broken down in the same manner as other sugars, oligosaccharides pass through the small and large intestines, at which point bacteria converts them to gas.

Give me a call today to learn how you can get on track to better health!

This article was posted in Acupuncture, Wellness. Bookmark the permalink. Follow comments with the RSS feed for this post. Both comments and trackbacks are closed.
781-383-8877 Directions Contact/Schedule